Tether has fleetingly grown amidst cryptocurrency market crisis. With volumes above $31 billion, USDT is now a member of the big 4, along with pioneer cryptocurrency Bitcoin, Ethereum and Ripple. 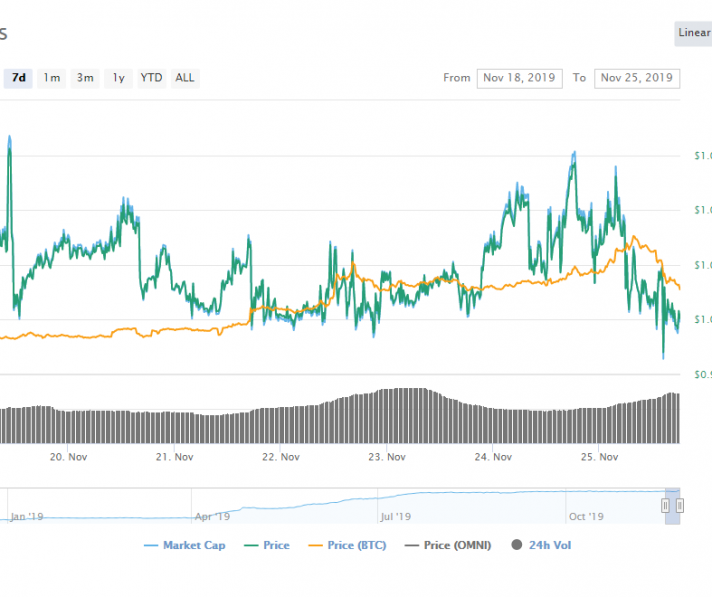 Now being the fourth largest cryptocurrency by market cap, USDT increased its value throughout the weekend, along with other stablecoins making their way higher in demand. The main reason Tether skyrocketed so high in 2019 was the supply expansion, with an estimate of 2 billion in coins circulating the market in the beginning of the year. Nobody knows the real reason of its sudden jump, although industry veterans argue the company is printing new USDT intentionally. Tether denies such allegations, explaining the growing demand is organic, and USDT is the ultimate tool to add market liquidity.

TETHER AGAINST THE WORLD

The world’s largest stablecoin filed a motion with the US District Court in New York’s Southern District to dismiss any outstanding lawsuits. With this move, the company aims to clean its name form frivolous lawsuits, many of which don’t have the required legal basis and hence should be dismissed. The lawsuit’s main basis was focused on Tether’s parent company – iFinex, manipulating the crypto market. In an official statement, Tether Inc. stated:

“As we predicted last month, mercenary lawyers continue to try to use Tether to obtain a payday. To be clear, there will be no nuisance settlements or settlements of any kind reached. Instead, all claims raised across both actions will be vigorously contested and ultimately disposed of in due course”

BITFINEX AND TETHER IN COURT AGAIN

Adam Kurtz and Eric Young filed a new class-action suit, accusing Bitfinex and Tether of “monopolizing and conspiring to monopolize the Bitcoin market”, while manipulating data or making inaccurate claims. Despite filing for a dismissal, the New York case is still ongoing.

Tether and Bitfinex have been allegedly causing prices of Bitcoin to be artificial during the Class Period:

Amidst the scandal and the market crisis, Binance reports about 40% of institutional investors go for Tether (USDT) as their main choice of stablecoin. 19% of the survey respondents claimed they use USD Coin (USC), and about 13% of interviewers claim they use TrueUSD (TUSD) and Paxos Standard (PAX). Other mentioned coins are DAI, BUSD, Gemini USD and USDS.

We are absolutely thrilled to announce that a new slot provider has been added in our lobby – Friends Play. It’s a new company currently offering a selection of slots, predominantly eastern themed. Hopefully we’ll see even more titles from this provider and you will have great times winning at their games!

Back to Venus – a new BetSoft Slot!

Apr 29, 2020 We are always very excited to present you new amazing slots by some of the most renown providers out there and that is why we would love to bring your attention to “Back to Venus” which was just added in the Slots section of VIPCoinCasino.com. This is a charming 5 reel, 20 […]